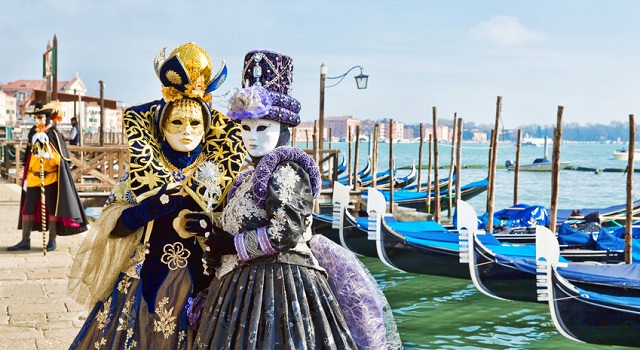 The Carnival of Venice (Italian: Carnevale di Venezia) is an annual festival, held in Venice, Italy.

The Carnival ends with the Christian celebration of Lent, forty days before Easter on Shrove Tuesday (Martedi' Grasso or Mardi Gras), the day before Ash Wednesday. The festival is world-famed for its elaborate masks.
History
It's said that the Carnival of Venice was started from a victory of the "Serenissima Repubblica" against the Patriarch of Aquileia, Ulrico di Treven in the year 1162. In the honour of this victory, the people started to dance and make reunions in San Marco Square. Apparently, this festival started on that period and became official in the Renaissance. In the seventeenth century, the baroque carnival was a way to save the prestigious image of Venice in the world. It was very famous during the eighteenth century] It encouraged licence and pleasure, but it was also used to protect Venetians against the anguish for present time and future. However, under the rule of the King of Austria, the festival was outlawed entirely in 1797 and the use of masks became strictly forbidden. It reappeared gradually in the nineteenth century, but only for short periods and above all for private feasts, where it became an occasion for artistic creations.
After a long absence, the Carnival returned to operate in 1979. The Italian government decided to bring back the history and culture of Venice, and sought to use the traditional Carnival as the centerpiece of its efforts. The redevelopment of the masks began as the pursuit of some Venetian college students for the tourist trade. Today, approximately 3 million visitors come to Venice every year for the Carnival. One of the most important events is the contest for la maschera più bella ("the most beautiful mask") placed at the last weekend of the Carnival and judged by a panel of international costume and fashion designers. Here are the winners:
Carnival masks
Masks have always been an important feature of the Venetian carnival. Traditionally people were allowed to wear them between the festival of Santo Stefano (St. Stephen's Day, December 26) and the start of the carnival season at midnight of Shrove Tuesday. As masks were also allowed on Ascension and from October 5 to Christmas, people could spend a large portion of the year in disguise. Maskmakers (mascherari) enjoyed a special position in society, with their own laws and their own guild.
Venetian masks can be made of leather, porcelain or using the original glass technique. The original masks were rather simple in design, decoration, and often had a symbolic and practical function. Nowadays, most Italian masks are made with the application of gesso and gold leaf and are hand-painted using natural feathers and gems to decorate.[citation needed] However, this makes them rather expensive when compared to the widespread, low-quality masks produced mainly by American factories. This competition accelerates the decline of this historical craftsmanship peculiar to the city of Venice.
History
There is little evidence explaining the motive for the earliest mask wearing in Venice. One scholar argues that covering the face in public was a uniquely Venetian response to one of the most rigid class hierarchies in European history.
The first documented sources mentioning the use of masks in Venice can be found as far back as the 13th century. The Great Council made it a crime to throw scented eggs. The document decrees that masked persons were forbidden to gamble.
Another law in 1339 forbade Venetians from wearing vulgar disguises and visiting convents while masked. The law also prohibited painting one's face, or wearing false beards or wigs.
Near the end of the Republic, the wearing of the masks in daily life was severely restricted. By the 18th century, it was limited only to about three months from December 26. The masks were traditionally worn with decorative beads matching in colour.
Click here to read more.
Article source: www.wikipedia.org